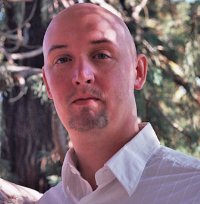 Shawn Speakman grew up in the beautiful wilds of Washington State near a volcano and surrounded by old-growth forests filled with magic. After moving to Seattle to attend the University of Washington, he befriended New York Times best-selling fantasy author Terry Brooks and became his webmaster, leading to an enchanted life surrounded by words.

He is also the webmaster for authors Naomi Novik and David Anthony Durham.

Shawn was a manager at one of the largest Barnes & Noble Booksellers in the country for many years and now owns the online bookstore The Signed Page and is a freelance writer for Suvudu.com, the Random House science fiction & fantasy website.

He also contributed the annotations for The Annotated Sword of Shannara by Terry Brooks, published in November 2012. And in July 2013, he edited the bestselling fantasy anthology, Unfettered.

The Dark Thorn is his debut novel.