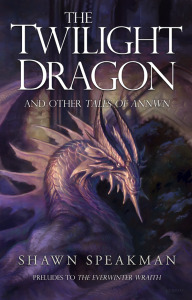 The Dark Thorn is my debut urban fantasy novel.

It has done remarkably well considering its publication roots and how it helped save me from medical debt. It was the story I used to test my ability to design and print a hardcover book, which eventually led to the design and printing of Unfettered. But it is more than that. It is a book I’m exceedingly proud of, a story about the prisons we place ourselves into as well as the kinds of magic that allows us freedom from those bars. Knight Richard McAllister is an anti-hero — but one placed within the contexts of an Arthurian world that has lost its way.

Since I am traveling down to the Grim Oak Press warehouse this week, I thought I’d put The Dark Thorn and its short story collection sequel The Twilight Dragon up for sale until Friday. I will sign the books of course but since I’ll be there I can also personalize them for those who wish it. Just place your personalization requests in the Notes section of checkout.

Here are some direct links:

Here is more about The Dark Thorn:

The three men are on a collision course with history—and their futures. For in the wilds of Annwn, death comes as easily as magic.

Take advantage of this while you can! The prices go back up Saturday! Ha!