How Did I Become Published?

At that convention, I took part in a panel featuring bestselling authors Terry Brooks and Robin Hobb, talking about writing, the book industry, and what it is like being an author. The first question I posed to Terry and Robin was, “How did you become published?”

A few days ago, I received an email from someone who had watched that video and brought to my attention that I had not answered my own question.

I will do so now.

Two major events led to publication of The Dark Thorn:

A DINNER WITH TERRY & JUDINE BROOKS

I had just graduated college in 2003. To celebrate, Terry and Judine Brooks wanted to take me out to dinner. When I told them my final quarters writing successes, Judine said something I’ll never forget:

“That’s great! Now you can become an author and keep our kids in the lifestyles that they’ve grown accustomed to!”

Both Terry and Judine laughed at their joke. I laughed too. But the seed had been planted. I have always been a writer but never thought it would be a viable way to make a living. But all of a sudden, I thought, “What if I take some time and learn the craft of writing?” What if I ended up writing Shannara novels in the future? I certainly had the background to do it, knowing Terry’s work quite well.

What if I did this? What if…

I decided to take a shot at it. I purchased the same computer, the same printer, and set up my office as similar to Terry’s as I could. That way, I had nothing to blame but myself if I failed. Thankfully, I didn’t fail. I told Terry my intentions and he helped me attend the Maui Writers Conference in Hawaii. I learned more in two weeks of instruction there about the craft of writing than I did at the University of Washington. On the flight home, I began outlining my first book, Song of the Fell Hammer, an epic fantasy novel that only saw ebook publication.

Writing a Shannara novel is not in my future, as far as I can tell…

But I’ve been writing ever since.

YOU HAVE CANCER, SHAWN SPEAKMAN

In 2011, I was diagnosed with Hodgkin’s lymphoma. Usually that would be difficult enough but I also did not have health insurance, a pre-existing condition making it impossible. Not only did I have to face cancer again but this time I’d do it while accruing a massive medical debt of over $200,000.

I had to do something about the debt. If I didn’t, I’d have to declare medical bankruptcy, effectively ruining my financial future for the next ten years. No new car. No new house. Credit destroyed.

At the time, my debut novel The Dark Thorn was in New York City, making the rounds with the various publishers. To try and begin to eliminate the debt, Terry Brooks offered to write me a short story that I could sell online. I took that idea, asked my other writer friends if they could do the same, and that is how Unfettered came to be.

I knew that Unfettered would get a lot of publicity. Terry Brooks. Naomi Novik. Patrick Rothfuss. Jacqueline Carey. Brandon Sanderson. And so many more great, bestselling authors involved. It would be a bestselling anthology and it would eventually do its job of alleviating that medical debt.

But I had no idea how to publish, print, and release a book. I was a writer, not a publisher.

I needed to learn a whole new skill set; Unfettered was too important to risk mistakes. Therefore, I chose to pull The Dark Thorn out of New York City and use it as my learning book. I learned how to hire an editor and have it edited. I learned how to lay the book out in InDesign. I had to build a web presence to sell it. And I had to put it in front of readers to buy.

It all worked out. I learned what I needed to. And I used those skills to publish Unfettered as well.

And I’m still doing what I love. 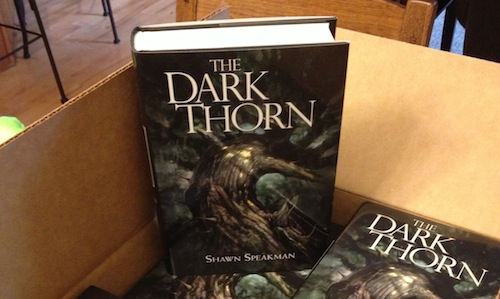 The first box opened and first book I touched!