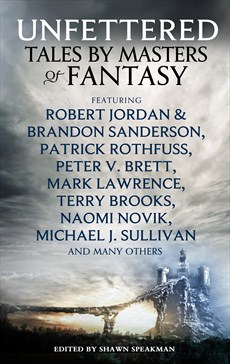 It’s a stunning and diverse collection of fantasy fiction from some of the biggest names in the fantasy genre – including Terry Brooks, Patrick Rothfuss, Peter V. Brett, Mark Lawrence, Naomi Novik, Kevin Hearne, Michael J. Sullivan, R. A Salvatore, Tad Williams, Lev Grossman and many others.

It also includes deleted scenes from Robert Jordan and Brandon Sanderson’s A Memory of Light, the final Wheel of Time novel.

The collection was gathered by Shawn Speakman, author and web guru for Terry Brooks. When Shawn fell ill back in 2011 and was unable to cover his medical bills, the fantasy community showed its exceptional generosity by stepping forward to help out. All of the authors involved were kind enough to donate their stories the collection to help him cover the costs – and what was produced is a truly wonderful anthology.

This is the first time UNFETTERED has been published in the UK, Australia and New Zealand, and our Orbit edition contains an extra bonus story from Shawn himself. Please see below for a list of all the stories included.

It’s available now at a special introductory price, and so it’s a great time to sample the fiction of some of the some of the best-selling and most critically acclaimed authors writing in fantasy today.

– Foreword by Patrick Rothfuss
– Introduction: On Becoming Unfettered
– Imaginary Friends by Terry Brooks
– How Old Holly Came To Be by Patrick Rothfuss
– The Old Scale Game by Tad Williams
– Game of Chance by Carrie Vaughn
– The Martyr of the Roses by Jacqueline Carey
– Mudboy by Peter V. Brett
– The Sound of Broken Absolutes by Peter Orullian
– The Coach with Big Teeth by R.A. Salvatore
– Keeper of Memory by Todd Lockwood
– Heaven in a Wild Flower by Blake Charlton
– Dogs by Daniel Abraham
– The Chapel Perilous by Kevin Hearne
– Select Mode by Mark Lawrence
– All the Girls Love Michael Stein by David Anthony Durham
– Strange Rain by Jennifer Bosworth
– Nocturne by Robert V.S. Redick
– Unbowed by Eldon Thompson
– In Favour with Their Stars by Naomi Novik
– River of Souls by Robert Jordan & Brandon Sanderson
– The Jester by Michael J. Sullivan
– The Duel by Lev Grossman
– Walker and the Shade of Allanon by Terry Brooks
– The Unfettered Knight by Shawn Speakman
– The Twilight Dragon by Shawn Speakman (bonus story for UK edition)

7 thoughts on “The UK Unfettered Out Today!”