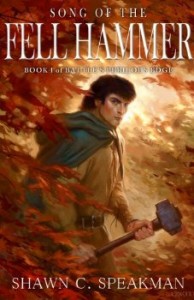 Unknown to Sorin Westfall, a blacksmith in the wilds of Thistledon, millennia of religious doctrine may hearken the end of all things. A subtle presence has infiltrated Godwyn Keep, the center of the Kingdom’s faith, and stolen the ancient Fell Hammer of Aerom. It is an instrument of immense power, able to permanently tip the balance of an agelong struggle between Good and Evil.

The theft of the hammer is only a precursor to war, as civil unrest erupts at the fringes of the Kingdom. The Marcher Lord, intent on seceding from the High King and ignoring the authority of Godwyn Keep, has begun events that cannot be undone, gathering thousands to battle the Kingdom’s armies. In the farthest reaches of the south, the Woman King—after losing her husband to political assassination—gathers her own armies to take advantage of the Kingdom’s unrest and sweep away the forces that occupy her ancestral homeland.

Sorin soon learns he is to play a role more important than any other, one that can either save or damn the Kingdom.

And all the while, Kieren the Black waits for the opportune time to rise out of the shadows and unleash his power to undo the entire world.

Thus begins the quest for the Fell Hammer.

Accompanying Sorin is an aged Knight who has lost his faith in Good, a Giant whose pacifistic upbringing conflicts with his desire to raise arms, and the Shadow whose mysterious intentions are an enigma even to herself. The company makes their way through uncharted wilderness and past nightmarish creatures into the darkest depths of the realm where their fate awaits.

Song of the Fell Hammer is currently not available.