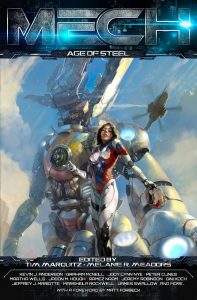 Not really. At least, not in the physical sense. I was sitting at my computer, working, when I received a message from one Joe Martin — publisher of Ragnarok Publications — asking if I’d be interested in writing a mech short story for a new anthology they would be producing. I replied almost instantly, “I’m not a mech person AT ALL. But I do love robots and could probably come up with something.”

And that “something” hit me like lightning. In the very next minute, I sent Joe, “My initial idea is a young ten year old girl and her floating robot companion come across a “dead mech” out in an apocalyptic desert. No idea why that just came to me.” He told me to follow the idea.

That brings us to now. I wrote that short story — titled The Tempered Steel of Antiquity Grey — and I’m quite proud of it. It’s the best thing I’ve written, I think, a new world with intriguing possibilities. Mech: Age of Steel will be publishing in the next few weeks and soon you will be able to read it in its entirety.

But the short story hasn’t let me go. The lightning got bottled, mine when I want it. And after talking to an editor who showed interest in it at Emerald City Comicon, I decided to uncork that bottle.

I’m working on Antiquity’s story again. And I love it.

That’s all I’m going to say about it. For now.

But since today is #1stChapterFriday, I decided to ask permission to post the first chapter from that book — the very first part of my Mech: Age of Steel short story.

I hope you enjoy it.

The Tempered Steel of Antiquity Grey

The fingers and thumb stuck out of the desert, unmoving, waiting.

Antiquity Grey bit her lower lip—a habit her grandmother scolded the fifteen year old daily. It was a dangerous situation. The mech hand was more than just some slag the wind had brought to the fore. It had likely been buried since the Splinter War, when mechs had battled over her planet’s ore reserves during her grandmother’s childhood. Chekker said shattered metal had fallen from the sky like meteors during the most violent of battles, burning Hellfire that pockmarked the desert with glass. The wastes had once been a graveyard of broken mechs and plating but no longer; those who pirated the past had scavenged it over the decades for profit, leaving almost nothing behind. Metal arms, metal legs, metal weapons. To be melted down and reconstituted on world as well as off.

But no one had discovered this. This was hers. The people of Solomon Fyre would sing her name long into the night when she returned with it, a treasure worth years of rummaging the sands.

And who knew what else was attached to the hand, buried beneath this horrible desert of her world.

Excitement moved Antiquity toward her airbike. She would ride down to the mech hand, blast away the sand, and see for herself.

“Wait! You are not going down there, Grey-child.”

Antiquity stopped, glaring at CHKR-11, the spherical bot spinning in the air but still safe behind the giant outcropping of rock that hid them from the sands.

“You don’t know what I am going to do, Chekker.”

“Grey-child, I know you.” CHKR-11 whirred, slowly spinning and stopping as it considered her, its soccer sport-paint once proud but now faded with decades of time. “The moment you came upon this mech I knew your actionable intentions.”

“There is no one around, Chekker!” She pointed in all directions, to the High Dringlam Mountains at her back and across the entirety of the desert, to its north, east, and south. “Look to the wastes! I see no dust movement. None!”

“That is true. None. For now.” The bot flew nearer her face in emphasis, his voice the static of his kind. “But I have been privileged to teach the children of your family for more than a century. None of them have possessed your proclivity for attracting danger.”

Anger rose up inside Antiquity. She no longer needed a nursemaid. Not anymore. “Do you see what’s down there, Chekker? Are your sensors shot? Look!”

The bot was unimpressed. “I do. I see trouble.”

“Trouble finds me all by itself, you old bot!”

The ancient floating ball did not reply. It just spun in front of her.

“What do you think we should do then?” she asked, waiting for the fight.

CHKR-11 wasted no time. “We return to Solomon Fyre. And inform the Elders.”

“No!” Antiquity argued, wanting to hit the bot. She had done it before and it had been like hitting a rock face. “No. No. And no. Why should they take what I have found? Why should they get to own what I find?”

“Because of your family’s past. And they are the Elders.”

“Maybe,” CHKR-11 said. “But your family is no longer in the position they once were, Grey-child. Grey has become your surname. And Grey is your legacy now. We will return to Solomon Fyre. If not the Elders, we will certainly tell your matriarch.”

“No, we will not,” Antiquity declared.

Before Chekker could respond, she gained the airbike’s seat, released the grav-stabilizers that kept it from floating away, and punched the throttle. No electric tase from Chekker stopped her as she thought it might; he obviously did not think leaving her immobile would be safer than letting her reach the mech. Instead, the old bot followed as he was programmed, meant to teach but also protect. She did not know how he arrived at his decisions but she was glad he had not stopped her.

Taking a final scan of the wastes and finding no evidence of metal scavengers, Antiquity rocketed down the mountain to the sands and pulled her airbike up next to the mech hand, its fingers longer than she was tall. Up close, she could see there might be more of it beneath the desert surface, lumpy hills of sand that could be other parts of the giant robot. Using her airbike’s thrusters, she began blasting away the desert, revealing a forearm, an elbow, a shoulder. The sun beat down on her, blisteringly hot, but she kept at it, her excitement fueling her adrenaline even while sweat became the glue that adhered grit to her tanned skin. The shifting of the sands over time had reduced the mech from a painted dark blue to a grayish one, but the metal retained its make, unmolested by wear.

As her work continued through the afternoon and with enough desert removed, Antiquity could see the mech had landed on its stomach—and the white-tinted faceplate of its massive head stared right at her.

“Help me, Chekker.” Antiquity could not see beyond the glass. “Run a diagnostic on the mech?”

The bot flew to where she stood beside the head.

“The mech is dead then.”

“Quite the contrary,” Chekker answered. “Its fuel cells are depleted from decades in the sand but they are not extinguished. It lives. And it is blocking my attempts.”

The mech still had power. Antiquity stood stunned. It was still a mystery what had brought down the giant warrior. But it hadn’t been a lack of power.

“Can you access its last moments?” she asked. “See why it crashed?”

“I can try, Grey-child. Security will have been one of its primary functions. It is technology not unlike my own though, built at the time of my own creation. There is a chance, no matter how poor the odds.”

CHKR-11 began spinning this way and that, each change in direction accompanied by a click as if unlocking a multi-number lock. Antiquity waited. She ran her hand over the smooth glass of the faceplate, wondering how the ancient treasure had been brought so low so long ago. After more than an hour and Antiquity’s patience with the bot spent, a series of clacks reverberated through the glass. Shocked, she jumped back from the mech, trying to figure out what was happening.

Then an explosion sent her flying through the air.

She landed hard. Fighting the darkness swimming before her eyes, Antiquity gazed up at the massive head. The faceplate had shot open—knocking her aside.

“Are you safe, Grey-child?” Chekker asked, now hovering over her.

Chekker had somehow instructed the mech to open its cockpit. The heat of surprise still coursing through her, Antiquity waved the bot away and, regaining her feet, warily approached the giant robot again. Its driver remained strapped in his harness, twistedly slumped to the side, his long hair pulled back into a single platinum braid similar to the one Antiquity wore herself. She had seen dead bodies before, but not like this; the skin of the driver had sunk inward, paper pulled tight over his skull. The driver had become mummified, like one of the horrors told to scare children before bedtime.

To get a better look, Antiquity half-stepped into the cockpit.

That’s when she saw the crest on the driver’s dark blue uniform.

“I had to copy and insert my system to gain access to the mech,” Chekker said, hovering behind her. She barely heard him.

“What?” she asked absently, mind a swirl.

“Why are you not listening to me, Grey-child?” the bot said, unable to hide the annoyance in its voice. “I had to copy my system. Great skill built this mech. I believe it belonged to a person of high import. Its systems mirrored that. The security features did not allow access to the mech. Therefore, it required replicating my system. Two against one are better odds.” Chekker went silent, a shadow at her shoulder. “If the deceased has left you unsettled, you may vacate the vehicle. Although it is my opinion you should have been prepared. These machines did not operate autonomously. All had drivers. You know this.”

“As I said, Grey-child, danger finds you all too easily.”

Antiquity thought Chekker meant their find—and maybe he did—but he had already disappeared from her side, flying toward the edge of the wasteland where the desert met vast distances. She scrambled over the sands, fearing to see what she already knew was there.

The robot gained altitude, just enough to get a better view without compromising their whereabouts. “Too far away. But the dust pattern suggests it.”

“Close that cockpit, Chekker,” Antiquity ordered, already moving to bury the giant mech again with her airbike. “Remember this location. And let’s get out of here. Now.”

“I could not agree more, Grey-child.”

With hope her find would remain hidden.

To read more, pick up the fantastic anthology Mech: Age of Steel edited by Tim Marquitz & Nick Sharps. It isn’t available yet but I will let you know when it is!