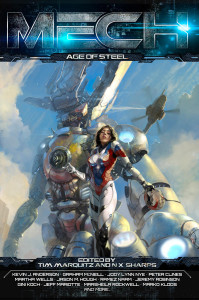 When I finished The White Rose Thief for the Blackguards anthology, I knew Ragnarok Publications would put together a gorgeous book!

And they did! I love everything about Blackguards. And in reviews, people seem to love my short story and many of the other stories in the anthology.

So when Ragnarok owner Joe Martin asked if I would be interested in submitting another short story for a new anthology they had planned, I said, “Absolutey! What’s the theme?” And he said, “Mechs.”

Honestly, I know nothing about mechs. I watched Robotech and Voltron back in the day, and I’ve watched Pacific Rim a few times. That’s about the extent of my knowledge. I almost told Joe I couldn’t do it, because I felt like a fraud. If I don’t know about something, why would I work hard to make myself look like a bigger asshole than I already am?

But the very next second after I had that thought—and before I had responded to Joe—the muse sent lightning from the heavens and struck me with it:

A teenage girl. With her floating, soccer ball, robot companion. Out in a desert world. And a giant mech hand jutting out from the sands, exposed, waiting to be found.

I’ve only had this happen once before, when I have such a clear vision of a scene. In both cases, the scene demands my attention. Questions form by the dozens. Who is this girl? Why is her soccer ball floating? And a robot? How cool is that! And why does she live on a desert world anyway? Was it always desert? And the mech hand? Is there more beneath the sand? How did it get there? And who might want it? Why is her name Antiquity? So many more questions!

I immediately told Joe that I would love to contribute a story. I even told him what my vision had been. He loved it. So I went with it. I wrote the short story in six days, which is fast for me. The story told itself. I finished it yesterday and I think it is pretty damn awesome. It is 7,300 words.

And I still have more questions. I think I might like to revisit that world again. Yup, I think I would very much.

The story is titled The Tempered Steel of Antiquity Grey. It will a part of this excellent line-up:

The Mech: Age of Steel Kickstarter campaign will launch in Q3/4 2015 and I’m super happy to be surrounded by such wonderfully talented people!

More news when I know it!