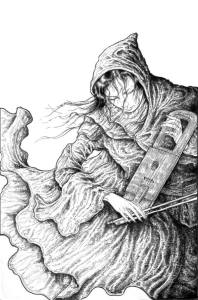 When the anthology Blackguards Kickstarted, I read over the stretch goals looking for one thing.

I love book interior illustrations. And especially in anthologies. They bring an additional beauty to the book and stories within. I knew the scene I would want drawn from my short story contribution, The White Rose Thief, but people would have to order Blackguards. A lot of people would have to order it. To get the Kickstarter into those before mentioned stretch goals.

Thankfully that happened relatively fast! Blackguards not only Kickstarted but stretch goals fell almost daily from the start. And because of that, artist Orion Zangara immediately went to work on the interior illustration that would feature my story’s main character, Rosenwyn Whyte.

I think he’s done a wonderful job. As you see in the image above, Rosenwyn is playing her instrument of choice, a crwth, an ancient stringed instrument associated particularly with Welsh music and once widely played in Europe. This particular crwth has been modified for Rosenwyn’s own purpose.

What you can’t see in the image is the Nix, a massive and ancient creature that is just beyond view, a hulking mountain of rock come to save or destroy.

All of this is a part of a much larger story that is going on, of course.

Here are the first paragraphs of The White Rose Thief:

The final note of the crwth died in silence followed by raucous applause.
Rosenwyn Whyte lowered the stringed instrument and its bow, inclining her head in polite recognition. The audience cheered all the more. She sat upon a slightly elevated stage at the Raging Drunk, the largest inn and tavern in Annwn’s northern city of Mur Castell, no other musicians accompanying her. Although larger than most, the Raging Drunk was like many such establishments she often played—smoky, loud, and the odor of crowded, unwashed humanity mingling with beer grown long sour. It attracted patrons from all castes, from the wealthy sitting in the upper balconies to the vagabonds who had managed to escape the notice of burley Byl Cornwyll, the owner. The Everwinter drove all of them inside, its snow and ice an indiscriminate hardship for all while music and drunken fellowship offered the only solace.
The unnaturally long winter had been good to Rosenwyn though. Music helped people forget the terrible season and music was her trade. This night, the crowd had been large. Money emptied from pockets to fill flagons.
Not that Rosenwyn saw much of either.

I will post the entire opening of the short story on Monday.

Oddly enough, the woman on the cover of Blackguards bears a strong resemblance to Rosenwyn Whyte as well. So I feel like I’ve had two very good artists work in my world in a single book!

If you haven’t ordered Blackguards, you should do it. It has a solid line-up of great storytellers. And the book will likely not be in hardcover for long. The Kickstarter is the only way to ensure your copy!

Do you want more Monday?