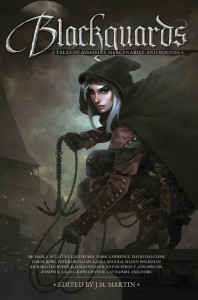 Several months ago, I was asked to contribute a short story to a forthcoming anthology.

Edited by J.M. Martin, Blackguards has one helluva line-up. I knew I had to bring my best writing. I also knew my story would be set in the world seen within The Dark Thorn. But my point of view character had to be a rogue, thief, assassin, or some other dark element in society. I thought about it a while. And I began to write.

I chose to write a female thief. A thief who no longer thieved. A woman with such a dark past, responsible for so much grief, that she shuns her former criminal life entirely, replacing it with one of music, in hopes of finding some kind of redemption.

But pasts are dark creatures, returning to the present when one least expects it. And Rosenwyn Whyte finds that out all too well.

The White Rose Thief is also a prelude to my next novel, The Everwinter Wraith. I have several stories that lead into that novel and the part that Rosenwyn plays is one of grave importance. I wanted to explore her more in Blackguards. That’s all I will say on that.

I was given a 9,000 word limit by Editor Martin. The White Rose Thief is 11,884 words long. Why did I break the imposed word limit?

Because screw limits! My readers like bigger stories and so do I!

Here is the line-up for Blackguards:

I’m super excited about Blackguards and the Kickstarter! I will be surrounded by some of the best writers in the business and that’s always fun.

But more importantly, I am eager to see if we can make our stretch goals. Two of them, more specifically. If you go to the Kickstarter page HERE, you will see we have writer Anthony Ryan waiting in the wings with a novella set in his fantasy world! Gotta get to $17,000 for that to happen. If we make $18,000, I could possibly have my story illustrated by one of the Kubert family! I’ve been a huge fan of Joe, Andy, and Adam Kubert for two decades and having Orion Zangara—just as talented as his family members—create art based on my story would be a surreal dream come true.

These stretch goals need to be met! Because I’m a huge fan of the Kubert art family as well as writer Anthony Ryan! Blackguards will be even more awesome with these extra people involved.

That means it is up to you. I’ve purchased my choice. It’s your turn! Click HERE and order your copy of Blackguards right now!

The White Rose Thief is coming your way soon.

And Rosenwyn is not happy about it!

1 thought on “I Am Contributing To BLACKGUARDS”