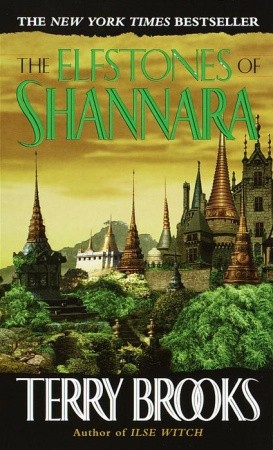 The Elfstones of Shannara by Terry Brooks is being adapted by MTV into a 10-episode television series.

I am unbelievably excited about it! The second book in the original trilogy, Elfstones is one of those books that has defined my life. I read the first book, The Sword of Shannara, when I was twelve or thirteen. It was the first adult book I tackled.

When I read that beat-up, ratty copy of Sword, I had no idea there were sequels though. I had a first printing mass market paperback and there was no mention of Elfstones or the third book, The Wishsong of Shannara. I was wholly ignorant to those works. Imagine my surprise when, one Christmas morning, I opened a present with two paperbacks inside. That morning shaped my life.

I read those books eagerly. And I discovered The Elfstones of Shannara is a masterpiece. While Sword borrowed heavily from The Lord of the Rings, Elfstones is its own original creature. It spent 16 weeks on the New York Times bestseller list. It is widely considered to be Terry’s best novel. It features all of the good, evil, battles, and magic that matter to epic fantasy. But it is more than that. Terry painted unbelievably complex characters—the enigmatic Druid Allanon, the reluctant Wil Ohmsford, the destined Amberle, the sassy Eretria, the resolute Prince Ander—who all fought against the world’s worst evil. It’s those characters readers have embraced and loved for decades, with a climax that still brings tears to the eyes.

In many ways, Elfstones is the book that put me on my path toward meeting Terry and my becoming his webmaster. It was magical in ways that words cannot express.

Without it, I doubt I would be where I sit right now.

Many years have now passed and I am still a Terry Brooks fan at heart. And, as his long-time friend and webmaster, I have always hoped that Hollywood would adapt The Elfstones of Shannara. But every time a deal was brokered it fell through. It never felt right. The timing. The people involved. It was hard watching each deal die. As you can imagine, I am protective of the man and his work. I felt his pain keenly every time.

The MTV deal felt different right from the start though. I can’t even describe how really. It was more than one or two people saying the right things. There was real passion from the very top of the cable channel. With executive producer Dan Farah acting like Nick Fury, MTV assembled the perfect creative team—the high-powered writing talents of Al Gough & Miles Millar, the direction of Jon Favreau and Jonathan Liebesman, and all with Terry ensuring the vision and essence of his novel remain.

The right puzzle pieces fit together. And the TV series and its fans will benefit from that.

Today, with the wonderful news that MTV has green lit the adaptation of The Elfstones of Shannara, I am reminded of that new 13-year-old Terry Brooks reader. I’m ecstatic to have found something new! I can’t stop smiling. I can’t wait to see what the next year brings all of us.

Because the creative team that will be producing this project is the right one—at the right time. I hope you will join me in spreading word about the forthcoming show every time Terry posts something about it!

The most exciting thing, in my opinion? When the show airs, new readers are going to discover the worlds of Terry Brooks for the very first time.

And feel like I do with every new Terry Brooks book.

3 thoughts on “The Book That Defined My Career Path”