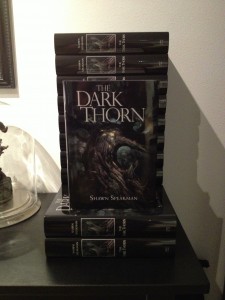 Copies of The Dark Thorn

This last year has been a great one for me. It saw the publication of The Dark Thorn and Unfettered, both of which helped eliminate my medical debt entirely. I’m thankful for that beyond words, both to Unfettered‘s contributing writers as well as those who read their work. If that wasn’t enough, both books have been favorably reviewed which makes me feel as though I have a real, genuine place in this book industry.

More than that, I made some great new friends and strengthened friendships I already had. When it comes to life, relationships might be the most prized aspect. Money. Power. Possessions. These things matter little. It is how we conduct ourselves every day to our fellow man and woman that truly matters, that conduct seeing us through the most difficult of times. I have been blessed with those kinds of relationships. They mean more to me than anything.

In 2014, the New Year, there are some exciting projects taking shape. First, I am writing the sequel to The Dark Thorn. It is titled The Everwinter Wraith and I am currently about 1/3 finished with it. I like what I’ve done so far. It’s a better book than Thorn, in my opinion, and that should please readers. At least one day in 2014, it will!

Second, I am writing a number of short stories that tie into Thorn and Wraith. These will be published in various anthologies. One will be in Rogue, an anthology edited by Roger Bellini. It features a new character, a female musician thief who will play a role in later books. Another short story will be in Neverland’s Shadow, a second Bellini anthology that I am helping to co-edit. Then there is the sequel to Unfettered, which will publish in August 2015 at the Worldcon in Spokane, WA! This last anthology already has a stellar line-up similar in scope to Unfettered, so get ready for that one!

Then there is another short story that I may release at the Phoenix Comic Con featuring, you guessed it, a phoenix! Richard and Snedeker have their hands full in this story right from the first sentence!

I will spend the next two weeks finishing my short story commitments before returning to The Everwinter Wraith. Thankfully Wraith has been writing itself lately! I do not know when Wraith will publish but I hope to be finished with writing and editing it by May 2014.

January 2014 also sees the publication of the Audible unabridged audiobooks for The Dark Thorn and Unfettered. You can pre-order them now HERE! They are narrated by the amazing Nick Pohdel, who also narrated Patrick Rothfuss’s The Name of the Wind and The Wise Man’s Fear. I can’t believe who lucky I am to have Nick on board!

And not only that, but Orbit Books UK will be publishing a new ebook for Unfettered in their territories (February 20, 2014), one that has a new cover and an extra short story from me. Don’t be angry, non-UK readers. That short story, The Twilight Dragon, will be published as an individual story on all ebook platforms not associated with the UK. More news on that when it is ready.

Not to mention the non-profit I am starting this year to help others with their medical debt/bills. I’ve been given a platform now, no matter how small, and I will use it to help others as I’ve been helped. More news on that really soon!

Then there is that little television adaptation project known as The Elfstones of Shannara… more on that when I can talk about it!

In short, 2013 was a great year for many reasons. But my hope is it has ultimately merely laid the foundation for something greater in 2014 and beyond!

Much love to you all! Thank you for following me, reading my work, and still finding all the wonder in the world that I have not been able to unsee since I was small.